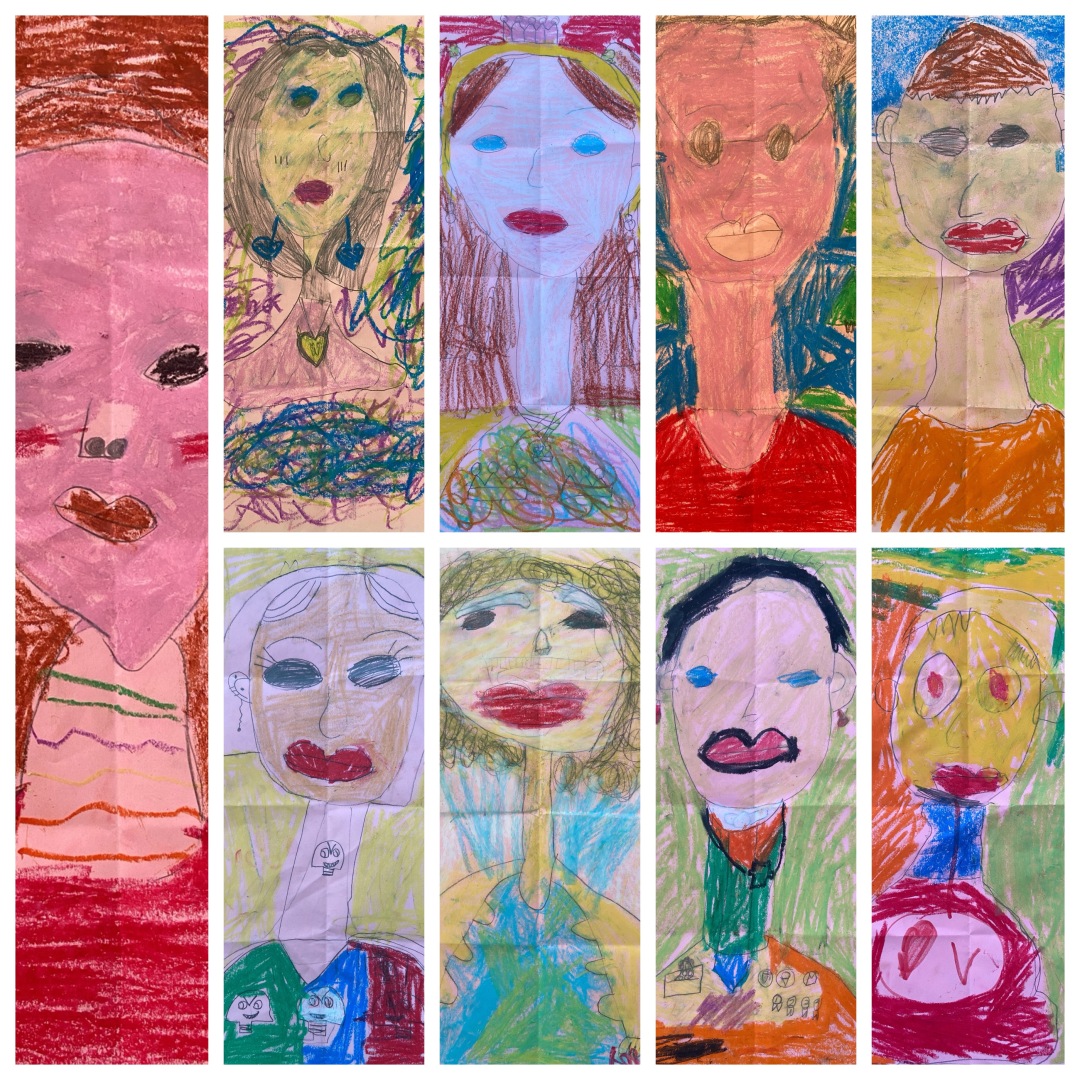 It started with a question: How do I dispel the fear some of my students have at making art? Well, I could lecture them about all the innovators and show them dozens of paintings by folks like Picasso, Klee, Modigliani, Park, ect… OR, I could some excellent YouTube resources and let them see the joy ion making things that appear odd. My kids seem to really enjoy things that are slightly odd and silly, so I chose that as my way of emphasizing the beauty of making mistakes and pursuing imperfections.

I found two videos to get this started. The first was a little long, but the Pink Panther-like animation kept them captivated: “Art with Matt and Dada – Amadeo Modigliani” It gave them a ton of info on why he elongated necks and left most of his eyes blank, and when I later asked them to do a show’n-tell on their own work, some of them repeated his reasons. It gave a fascinating set of reasons for the colours and his choice of line and shapes: using them to express feelings over visions. I heard many “aahhhs” and saw some tell-tale wide eyes indicating that many of myths kids just had A-HA moments of understanding. (ps: I live for those moments!)

I then jumped over to Mr. P’s Studio (because he uses his unique accent to kick the kids into giggles of enthusiasm) to follow his expressive hands and joyous voice animate a fun how-to on making Modigliani style portraits: “Art Lessons for Kids: Amedeo Modigliani“. After the giggles died down, they were ready to dive in to making.

With a piece of pink con structure paper (11″ x 14″) to encourage them to consider unconventional colours for skin tones, like Modigliani does, and at least 5 bright pastel crayons. I gave my usual encouragements about the benefits of making mistakes and not worrying about perfections… just make what feels good to them… they were instructed to make a portrait of whomever they wanted. I tossed in a little mystery fun and suggested they keep the subject a secret for a later guessing game during show and tell.

I’d like to say there were no emotional outbreaks among my few perfectionists, but that would mean I’m missing a great teaching moment for at least a few of them. One of my little angels was visibly frustrated at their work (which was frankly beautifully done) and tossed it on. the floor. I gave him a little time out, then sat next to him to talk while the others went off to recess. I showed him some of the other’s works, how beautifully silly and wonderfully fun they were, all the while asking him if they were perfect. He could only resist smiling for so long. Then one of those perfect teaching moments occurred…

I thought we were alone when I asked him to ell me who his portrait was… it was of a friend whom he very much likes… of course she was standing behind me satisfying her inexhaustible curiosity and I felt her poke her head around me to look at it: she jumped in close, squeezed with joy, shouted “I love it” and gave him a big hug! Well, he was blissful again! Ah, the simple and beautiful loves of six year olds!

As a side note… while editing these drawings for this post, I was struck with a truth I’ve heard Picasso exclaim regarding the purity off children’s art expressions; I wondered if I could possibly paint as freely as my kids did!?!

Here are some of their glorious portraits of friends, family members, themselves, one deity/”aunt getting married”, one Prince Philip, one celebrity, and I suspect at least one of me, although some of my students were too shy to say who they drew.

Artist, Teacher, Life-Long Learner: Curiosity fuels my creativity and inspires me to share what I learn with fellow life-long learners. View all posts by The New Renaissance Mindset

4 thoughts on “Grade One Student Portraits – A La Modigliani”

The Musings of a Writer / Freelance Editor in Training

A collection of writings about place space writing and art ...

Have lecture, will travel!

get outdoors; find inspiration; discover yourself

Faith saved us from the savages that we were, losing faith makes us savages again

Thoughts on art and language

Books, words, gin and much more