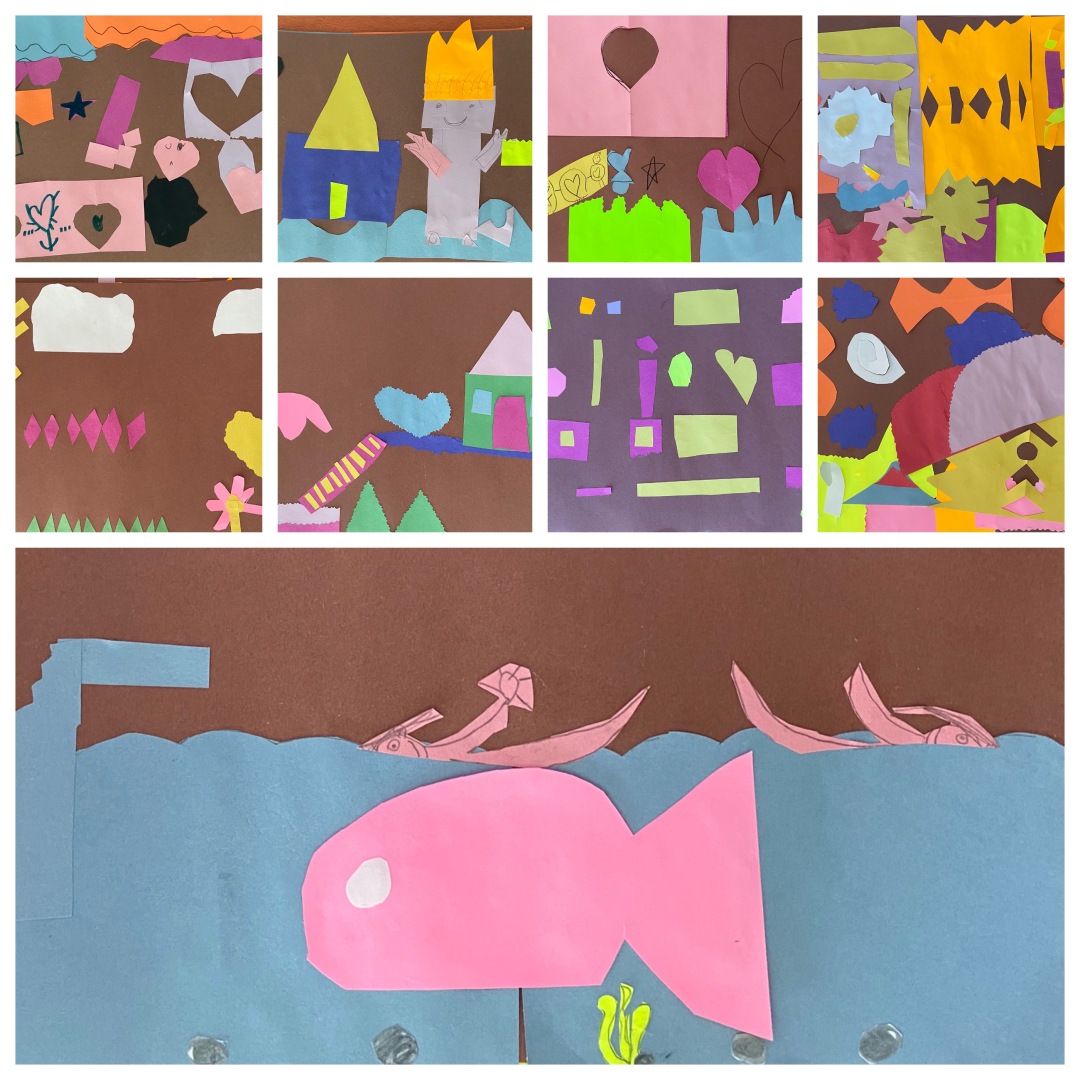 Cutting it up with Matisse – A First Graders’ Art Exploration

Time for a little fine-motor exercise… let’s give them another material to play with. Well, if I’m being honest, they already use construction paper to decorate various holiday projects. In fact, it is a frequent request by my first graders. So, who better to demonstrate composition possibilities using cut-outs than Henri Matisse???

The kids came in after recess to find a large pice of brown construction paper (14″ x 17″), a glue stick, and a pair of scissors on their desks. In the front of the class were several bins of scrap and whole pieces of coloured construction paper. I also let them use a set of texture scissors for wire edges. Next time I do this, I’ll add bins of textured paper, tissue paper, wallpaper samples, and textile samples. I might even try it with magazine pages to focus on shapes and abstractions.

I started by telling them they would be making a very different kind of painting. this built the anticipation and them I told them they would paint with paper. I got some questioning looks, and lots of cheers. Before showing a how-to video for inspiration (Matisse Paper Cut Outs Tutorial for Kids), we went over the learning benefits of making mistakes and discussed some possibilities of what could be in the composition… based on their questions. I gave them only tow directives: it could be either vertical (portrait) or horizontal (landscape). Yes, I’ve been peering in vocabulary everywhere I can. They all chose landscape, like the video showed. The second was they were allowed to pick five pieces of paper to start with and could share scraps with classmates. I let some come get more when they asked and told me their plans.

They had the initial 50 minutes to get through the instructions and make it, but I allow them to use time later in the day… they were also told they would have the opportunity to talk to the class about their work and field questions on it. This has been a great motivator for participation, as I have a class full os little storytellers.

Here’s what they made:

Artist, Teacher, Life-Long Learner: Curiosity fuels my creativity and inspires me to share what I learn with fellow life-long learners. View all posts by The New Renaissance Mindset

A Directory of Great Architectures

A Life Most Ordinary

A Place for Global Citizens and Polymaths